Rotate it, Rebuild it and a Roomy Kitchen is Created! 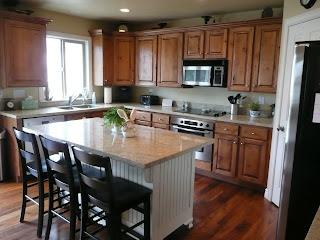 We had a lovely island, but it was too crowded in our kitchen!  The island was pushed into the kitchen too far for my taste.  I'm guessing it's because the prior owners wanted a big table in this area too.  We have a dining room, so didn't need another big table in here.   If the refrigerator door or dishwasher door was open, there was no way anyone was getting by them!  I've been told that a good distance between counters is 39".  Well, the before distance was about 28"--unacceptable!

Over the holidays when our son was home from college, he and my husband picked up the island and rotated it 90 degrees.  OMG, it was so much better already!  I finally had room to walk around it in the kitchen!  So even though we were just 'trying it out' and my husband had every intention of rotating it back to where it was until he could build a new one, I was having none of that!  Yes, when I had to get in the drawers, they were on the opposite side of the dishwasher, but that extra room was heavenly and it was only for a couple of weeks.  Here is a picture of the old island turned the new way. 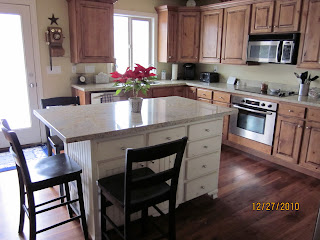 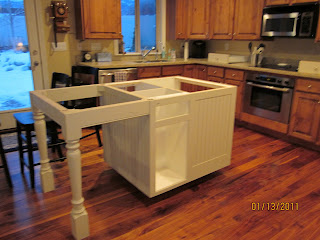 A couple of weeks ago my husband built a new base.  We decided to try our best to re-use the granite top as granite tops can get expen$ive!  Luckily it all worked out!  He also re-used a lot of the beadboard and the feet.  We now have gained an extra drawer and a pull out for the recycle bin.  We also have an area for stools.  By rotating it, we gained 14" on each side of the island! 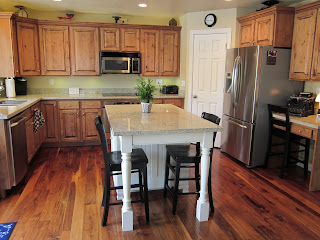 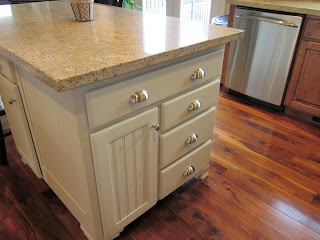 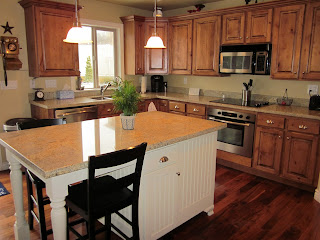 We also added some new pendant lights, so now it's a great place to read my morning paper.
We were very lucky that the floors were finished under everything, so we didn't have to worry about refinishing them again.

I am linking to :

My Uncommon Slice of Suburbia

Posted by Pam@OurAdventuresInHomeImprovement at 7:39 AM